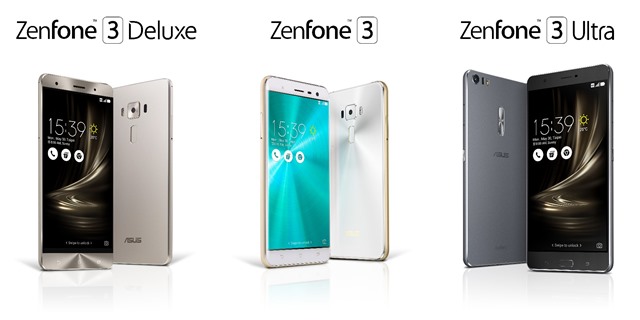 The annual tech event, the Computex is taking place in Taipei, Taiwan by tradition. ASUS didn’t disappoint its fans and brought new additions to the ZenFone line. Say “Hello” to the three new smartphones of the ASUS ZenFone 3 family.

The first handset is the ASUS ZenFone 3. It is a 5.5-incher provided with an IPS+ screen with a resolution of 1080p. The panel of the new device is made of glass and metal. Under the hood of the smartphone is packed an octa-core Qualcomm Snapdragon 625 processor paired with 4GB RAM. Software-wise, the ZenFone 3 is powered by Android 6.0 Marshmallow. The cameras of the handset are among its key features. The ZenFone 3 has a 16MP rear primary snapper with TriTech autofocus of ASUS, phase detection, laser autofocus and plenty of capabilities. The secondary camera is an 8MP sensor. On the back of the device is set a fingerprint reader. The price of the ASUS ZenFone 3 is $249 for the more modest model with 3GB RAM/ 32GB storage. The handset includes also a microSD slot for cards and a USB-Type C port.

The second new smartphone of the series is the ASUS ZenFone 3 Deluxe. As its name suggests, it is packed with more high-end capabilities and features than the original device. The Deluxe phone arrives with a 5.7-inch Super AMOLED screen, 1080p resolution. The processor that powers the flagship is with Qualcomm Snapdragon 820 chip coupled with 6B RAM. The main camera of the ZenFone 3 Deluxe is with a resolution of 23MP and IMX318 sensor of SONY. It has f/2.0 aperture and the TriTech autofocus tech. Just like its more low-end sibling, the Deluxe phone has a fingerprint reader on the back. The ASUS ZenFone 3 Deluxe is outfitted with a full-metal body. The price of the phablet is $499 unlocked.

The third new phone that joins the ZenFone 3 series is the pretty large ASUS ZenFone 3 Ultra. It sports the whooping 6.8-inch display (almost the size of a tiny tablet) with a resolution of 1080p. It has a lot of the specs of the ZenFone 3 Deluxe, like the 23MP main camera and the slick design. The processor tucked under the hood of the large-sized phablet is with Qualcomm Snapdragon 652 chipset and 4GB RAM. The price of the ZenFone 3 Ultra is $479 off-contract.

What do you think of the new additions of ASUS? It is time to share your impressions.