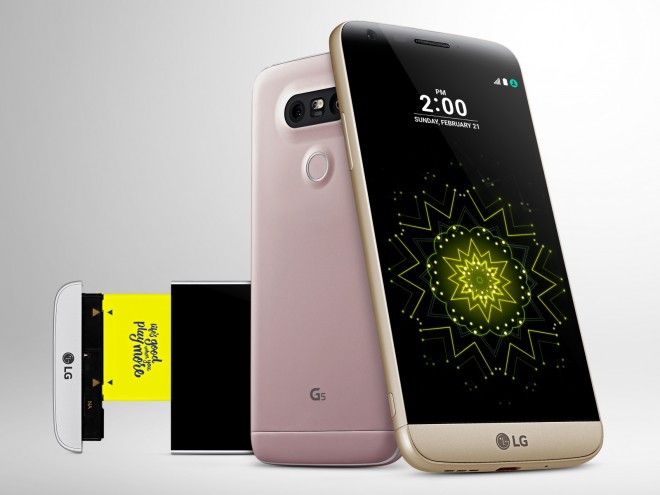 Do you have high expectations for the new flagship of LG? Well, there is a good chance that LG G5 outruns your highest expectations for a high-end smartphone. The Korean manufacture took the wraps off the flagship and its “Friends” (more about them later) at the press MWC 2016 event. Those of you who are attending the event will have the chance to see the LG G5 in real. It is expected to go for sell in April. What is so special about the new star of LG? The easiest answer is – what isn’t?

First things first – the looks. LG G5 festinates with a marvelous appearance that grabs attention at first glance. It sports a slim full-metal unibody design with rounded edges and curved Corning Gorilla Glass 4 on the front side. The appearance of the new flagship reminds of the HTC One M7 released three years ago. This was the smartphone that became famous as one of the most stylish and elegant devices ever released on the market. The rear panel of the G5 hosts the power button just like the predecessors of the device.

The power button has an integrated fingerprint sensor. The volume controls are located on the left side of the handset. One of the most innovative things about the design of the LG G5 is the modular slot attached to the device. It enables users to expand the most important for them features, like the battery, the camera or the audio. How is this working? That’s what “Friends” are for. LG introduced abundance of accessories, known as LG Friends that can be attached to the modular slot and enhance the capabilities of the flagship. Before I present you with more details for the accessories, let’s go through the specs of the G5.

The flagship is a 5.3-incher packed with a Quad HD IPS Quantum screen. It is protected with Corning Gorilla Glass 4. The display has an always-on mode. Thanks to the dedicated memory and power-saving secondary chip, the flagship doesn’t use the main chipset all the time which prolongs the battery life. In the gut of the new star of LG is ticking the powerful Qualcomm Snapdragon 820 chip paired with 4GB of RAM. In terms of native storage, the device offers 32GB out-of-the-box and a dedicated slot for microSD cards that enable expansion with up to 2TB. Today, it is really rear to see a high-end smartphone with a separate slot for microSD cards.

The software running on the LG G5 is the newest update of Google, the Android 6.0 Marshmallow. Moving towards the cameras – the G5 features a duo main camera on the back with a 16MP sensor with 75° Field of View (FoV) paired with an 8MP with even wider viewing angle 135° and 8MP resolution. Needless to say users have a rich abundance of effects to use for the photos along with a real-time preview option. The secondary camera is an 8MP snapper on the front side. LG G5 is equipped with a 2800mAh Removable battery. This is another feature that we miss in most of the flagships getting launched lately. As I mentioned above, on the backplate is located the fingerprint sensor. 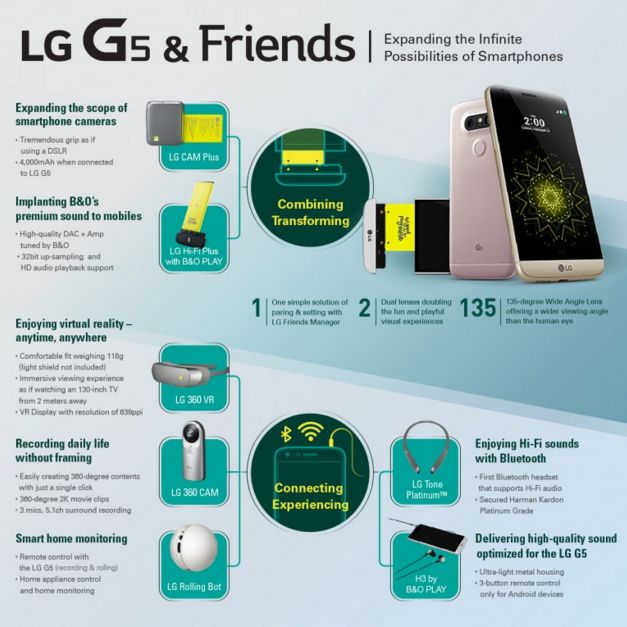 The modular accessories include the LG Cam Plus, the LG 360 Cam, the LG 360 VR, the LG Hi-Fi Plus and the LG Rolling Bot. You can learn more about the capabilities of the accessories from the video presenting the LG Friends. The new flagship will be offered in titan, gold, silver and pink colors. The price is not officially revealed but the expectations suggest that LG G5 will cost around $550 unlocked. Stay tuned.